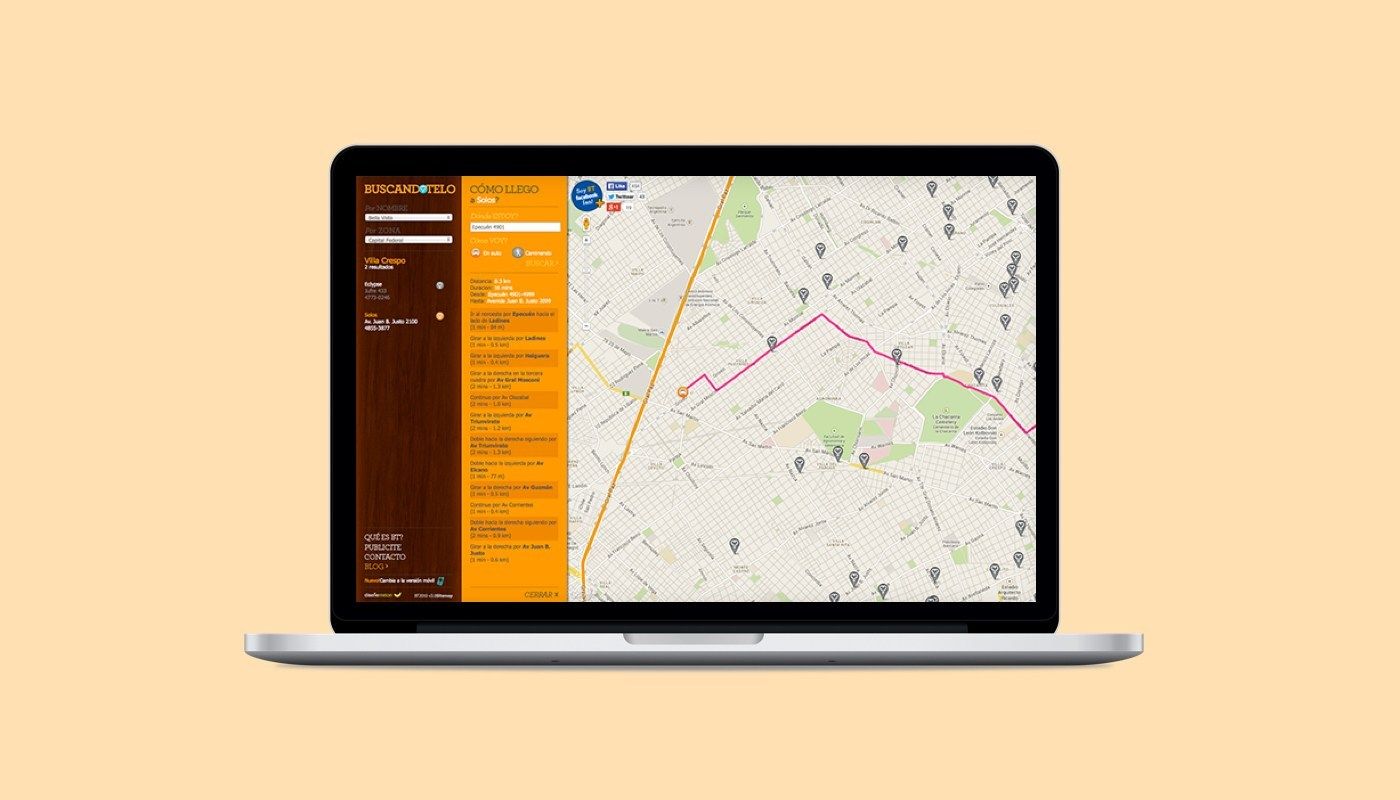 In the era of Google Maps, love hotels in South America are still hidden and purposely hard to find. As part of a navigational experiment, we go explore.

In the era of Google Maps, love hotels in South America are still hidden and purposely hard to find. As part of a navigational experiment, we go explore.
"To me, speed is really about convenience." -Marissa Mayer.
Years ago, Fernando and I were coworkers at Web360. He was a developer specialized in SEO. And I was working on designing interfaces and learning about product design. Something we both had in common was our desire to experiment with new technologies. And also, that neither of us was born in the city of Buenos Aires, the third-largest conurbation in Latin America.
In a city so hard to navigate you have to spend a good time of your life learning directions and ways to navigate it. If finding a place isn’t hard enough, try finding places that purposely live in the shadows. Those locations are the telos -Argentine slang for love hotels. A type of short-stay hotel found around the world operated primarily for the purpose of allowing couples privacy for sexual activities.
The spontaneous situations in which our friends had to find one, was the design problem that motivated us to develop a new tool. Competitors at that time were websites with long lists of directions. Impractical for when you’re on the street, and you need a quick reference. People had to read the directions and then get a map to locate the final destination. Some people planned the date, but sometimes they were in a rush.

At that time, Google Maps had launched their first version of their open API. Places weren’t still mapped, and especially in Argentina where technology always arrives with years of delay. Fernando and I began exploring the idea of utilizing maps because we knew geography provides the context for our personal lives. We had in our hands data and technology that allowed us to explore a geographic problem.
Maps transform how we navigate, how we make decisions, how we share stories. Spatial thinking is something we use all the time. Making a decision on where to take our next vacation; determining whether or not we can make it to the next rest area. And the idea of mapping these hotels was to bring users accessibility and convenience.
We believed that presenting data in a reference map for people in the streets of Buenos Aires would achieve an improvement in the speed of their navigation.

After exploring forums, websites and finally checking the information with each hotel owner we built a database. Financially we had no budget. It was all human and intellectual resources put to work. So one by one we entered the latitudes and longitudes of 250+ locations. We organized the information in a way that would allow the user filter by zone, name, and region. With this information, we also built an SEO structure so users could find the result in Google-based searches on specific inputs of areas and streets.
Most of our time was also spent on understanding the API and finding the best ways to use all of its potentials. For example, we also added the feature of navigating between points. With this, we provided the ability to find the closest route to get to them. Whether if you were walking or driving.
"There’s no such thing as information overload, only bad design." -Edward Tufte.
Since we weren’t affiliated with any of the hotels, we tried to remain objective and not to post comments or to have a ranking to rate them. We just wanted to inform the location and the methods for contacting them. There was indeed a small revenue when we placed Google AdSense ads in the interface.
We knew how our competitors abused these methods, so we remained minimal and as unintrusive as possible. The revenue helped us pay for the hosting services and general maintenance of the site.

The visual impact of the map in first place kept the intention clear and concise. This is an actionable web app. Self-serviced, and resolved on a single screen.
We ended up with a huge collection of geographical coordinates and metadata that helped the SEO rankings escalate. Competitor websites start using maps as well. But they were still an addition to the lists, and you had to navigate the website to find them.
The goal was achieved when we realized there was a steady income and the SEO rankings favored us with zero dollars invested. People’s feedback helped make corrections and also add new locations.
In the years to come we added the rest of the country, and then Uruguay and Mexico. With an average of 10,000 monthly visits.
Unfortunately, this is not a very popular market, and it’s still seen as a sketchy niche. By the time we had to build up our portfolio, we weren’t sold on the idea of having our names attached to it. We enjoyed the challenge, but we decided to move on and embark on other new ventures.